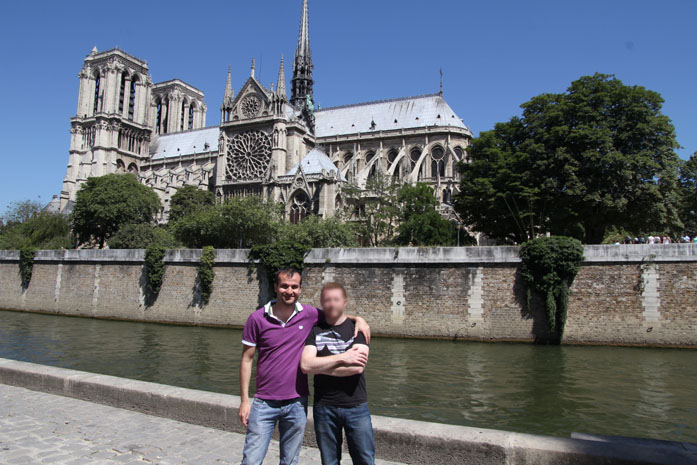 In May 2011, back when microstock was my second job, I booked a flight to Paris, asking a friend of mine to come with me, as I often did at that time. Looking back to those years, I think they are the happiest of my producer career, because:

Producing microstock today can become only a second job for many of those who read this post.

In 2013, I was under pressure while filming Berlin. I had to shoot the whole city in three days, and I had to film every single subject with the sun behind it. My anxiety rate stood up: microstock was the only way I had to make money, not anymore a GREAT way to visit the world and pay my flight tickets with my sales.

Still today with microstock you can:

But to earn the money you need to do this second job a full-time job you have to wait years. With my course, I can teach you how to do it in less time, but I’m not Houdini. That’s why I’m sure the average visitor of this blog more likely will work in the peaceful Paris 2011 scenario, not in the anxiolytic mood of the Berlin 2013 scenario.

I spent my best professional moments in European Capitals with the camera around my neck. To produce content that sold I had to run away from the comfort zone of being just a tourist, but only microstock allowed me to earn the money I needed to book the next trip and gave me a lot of professional satisfaction. Since I’m not rich, thanks to stock footage, I travelled more than I could do. Without Pond and Shutterstock profits I probably would have visited one or two places a year.

From 2006 to late 2012, I spent every free day I had in a European Capital and still, at least once a year. I spend some time in a place across the border that would be worth shooting (I’m Italian, and sometimes I don’t even need to cross the border to do that). Look at the footage I shot in 36 hours in my Capital:

The best time to create microstock is in spring. Old-school photographers who consider only the artistic side of photography might not agree with this statement, but I’m an entrepreneur and not an artist playing guitar in the street and asking people for a coin.

Mine is not a technical consideration. We all know the parable of the sun is the lowest during the winter solstice and the highest in June, so the light with the best angle is in December (in the northern part of the globe).

But going to London in January, as I did once when I was a newbie, means not only suffering cold but also working with 18 hours of darkness. You can’t do that if you want to earn real money. With this in your mind, spring represents the best compromise, unlike the season symmetrical to it, autumn, which is full of colors (I’m talking about leaf colors) that make the shot unusable in video projects set in other months.

Did I make myself clear?

Look at this footage I took in Salzburg in November:

Leaves are red in this video. How can a buyer buy that footage if he’s talking about summer or spring in his video?

You can see red leaves on trees for only two or three months a year. On the contrary, you can see green leaves for six months.

What’s the best choice for a microstock producer who wants to find the more buyers he can?

In the mind of a microstock producer, spring must be the best season to go out with the camera. By the way: Paris 2011 meant 4000 euros in royalties for me, despite many technical errors that today I don’t make anymore. That happened because of:

Today those earnings with that subjects are impossible for a 2/3 days shooting. 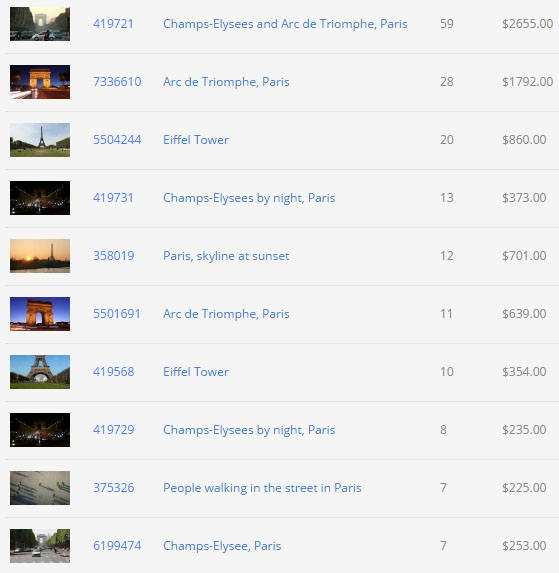 My Pond5 best sellers with the keyword Paris (They come from three different trips).

My Pond5 best sellers with the keyword Paris (They come from three different trips).

I really miss those days when:

I’m not telling you that those days have finished because I want to break your dreams. I just want to be honest. This is what happens today, but there are still a few little things to do if you want to sell your content and earn hundreds of dollars for every trip you make. Choosing the right period of the year is one of those.