My job as a freelance graphic designer (and stock footage producer)

My name is Daniele Gay. I was born in 1977 and I'm an Italian freelance graphic designer with a great passion for photography and an upcoming new career as a stock footage producer.

My job is usually:

Along with this, I am a photographer and, especially after buying Daniele Carrer’s course, I started selling my work on microstocks like Shutterstock and Adobe Stock.

To learn how to be a graphic designer, I attended a comics school in Milan. More precisely, I took the advertising illustration course.

I did it in the late 90s and early 2000s. After that, I got a piece of paper that, for work, is worth little or nothing, some knowledge of illustration and a lot of hope to find the work I loved.

Like all my classmates, once I graduated, I created an eBook with my portfolio and started visiting: 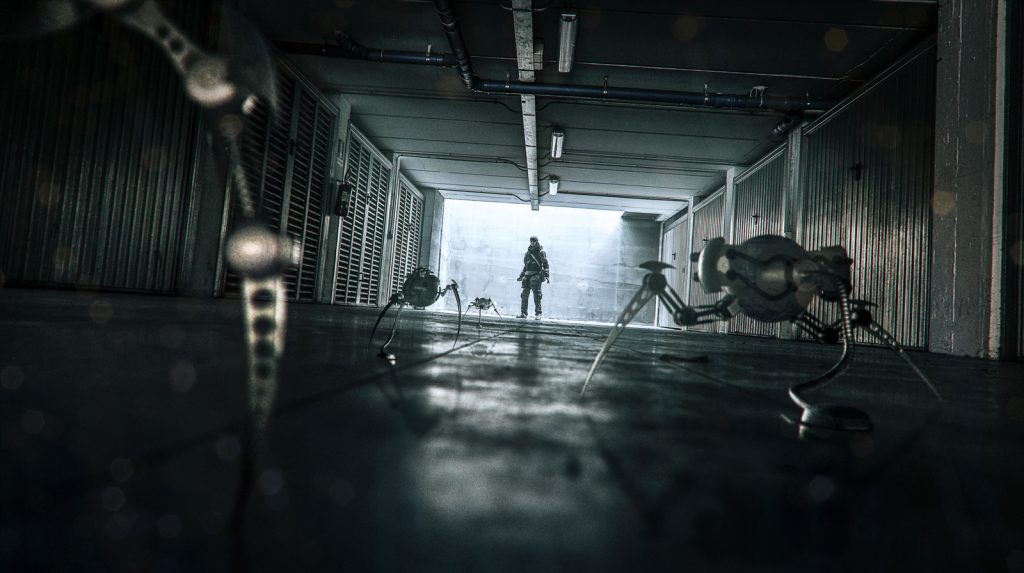 My first job with a magazine

Jack, in the early 2000s, was one of the most important Italian magazines. It was about technology, with an average circulation of about 100,000 copies.

I knew its Art Director and gained his trust, so he gave me the chance of my first graphic job for the magazine – it was a blue plastic cube covered in water droplets. From that moment on, I was a freelance graphic artist, and they kept calling me for other work.

I used to make simple photomontages of electronic objects, such as:

They provided me with the photographs and explained on the phone how they wanted them to be published in the article. Often the work was limited to:

Just a few times, they gave me more complex work for which I had to use 3D graphics.

Today, I would say that what I did for Jack was not difficult from a technical point of view, but I was still inexperienced and I considered it as an opportunity to rise through the ranks. The earnings were good compared to today's graphic design market. In that period, I was also working as an employee, and with what I did for Jack – who gave me jobs almost every month – I earned a second salary!

My luck at that time was that I did a lot of work for them. Then the newspaper closed in 2012 and it all ended for me.

One of the most important Italian magazines is called Focus, and it's about science.

They contacted me via the BeHance website (this is my profile there) but since I didn't check it often, I didn't see the message. Luckily, they then called me on the phone, thanks to Jack’s Art Director, who gave my number to the staff.

I've been working with them as a freelance graphic designer for over a year now.

I immediately made my first cover: 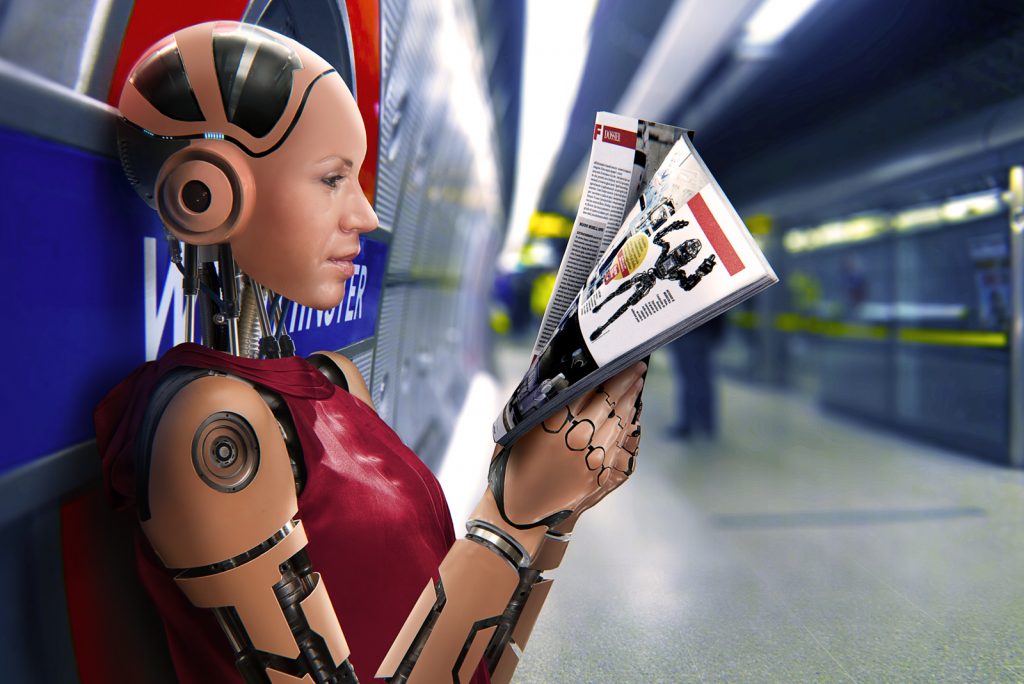 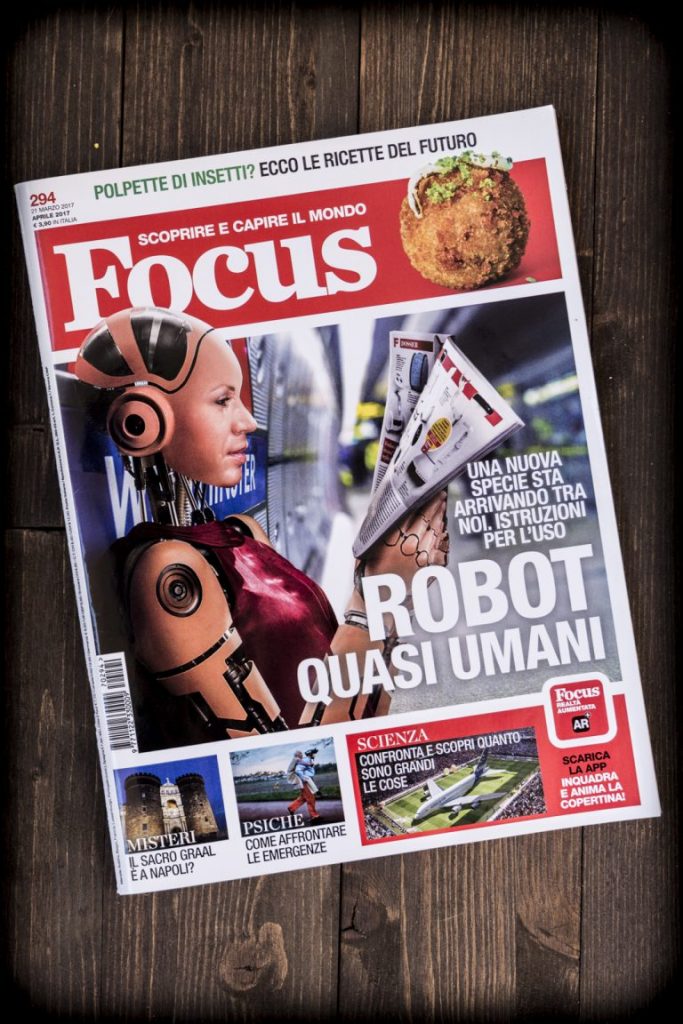 I also did some other work for internal pages in the same issue.

For example, the image below is the Hindenburg airship that I recreated in 3D and placed above Capitol Hill in Washington. The other part of the illustration (Capitol Hill) was purchased on Shutterstock: 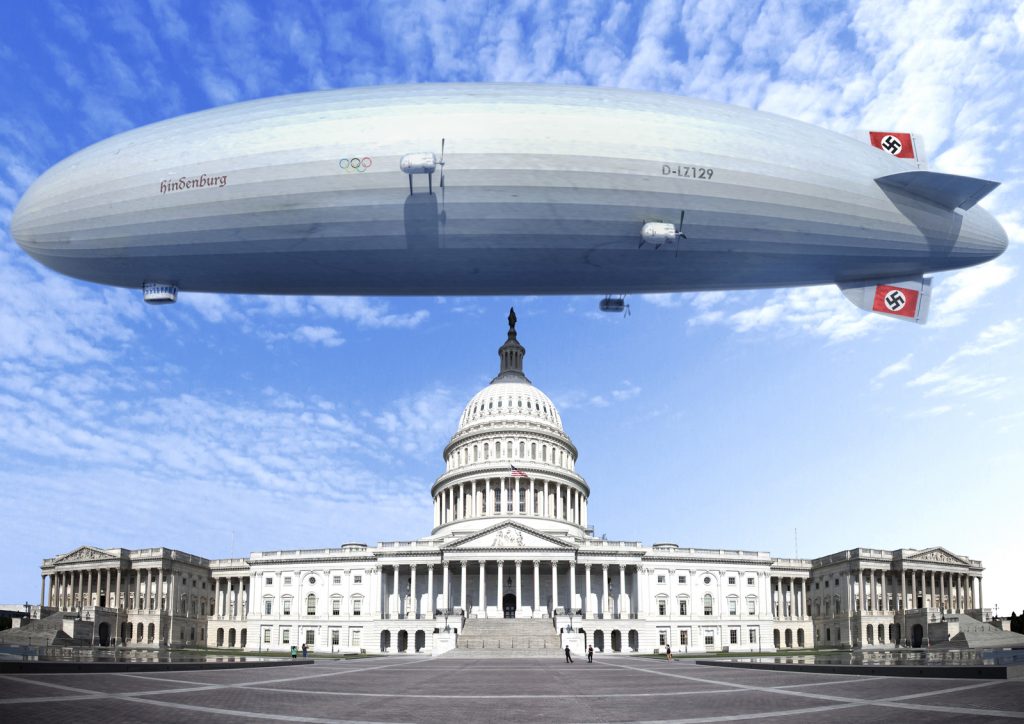 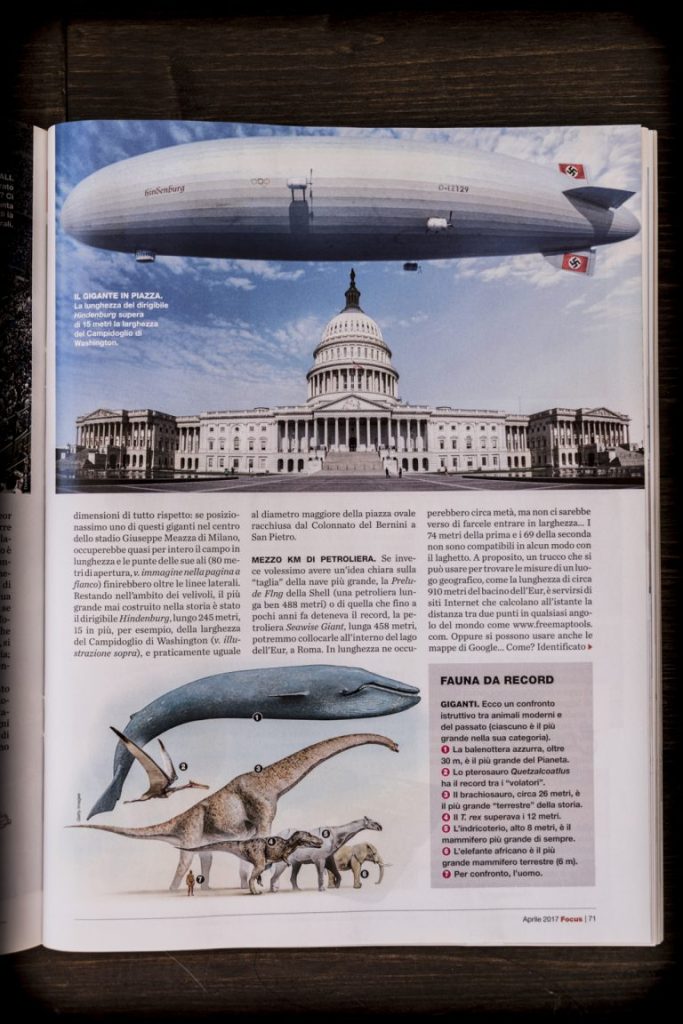 Then I did other jobs like these, which included another cover: 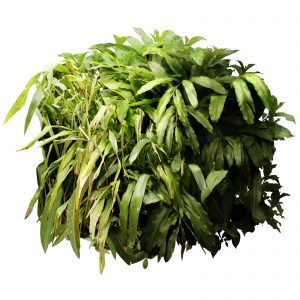 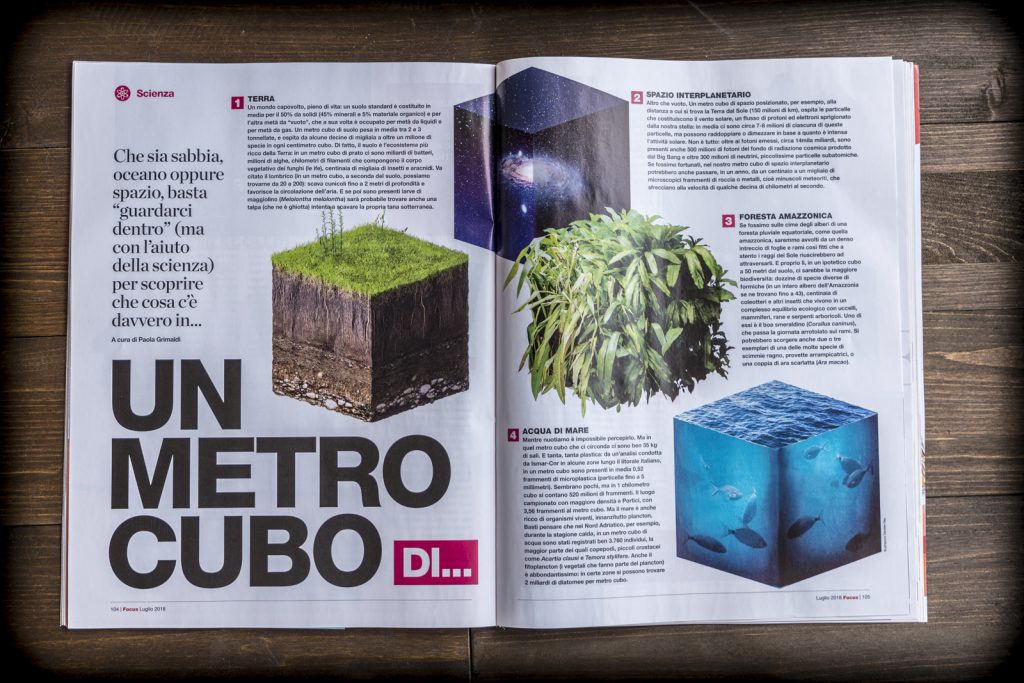 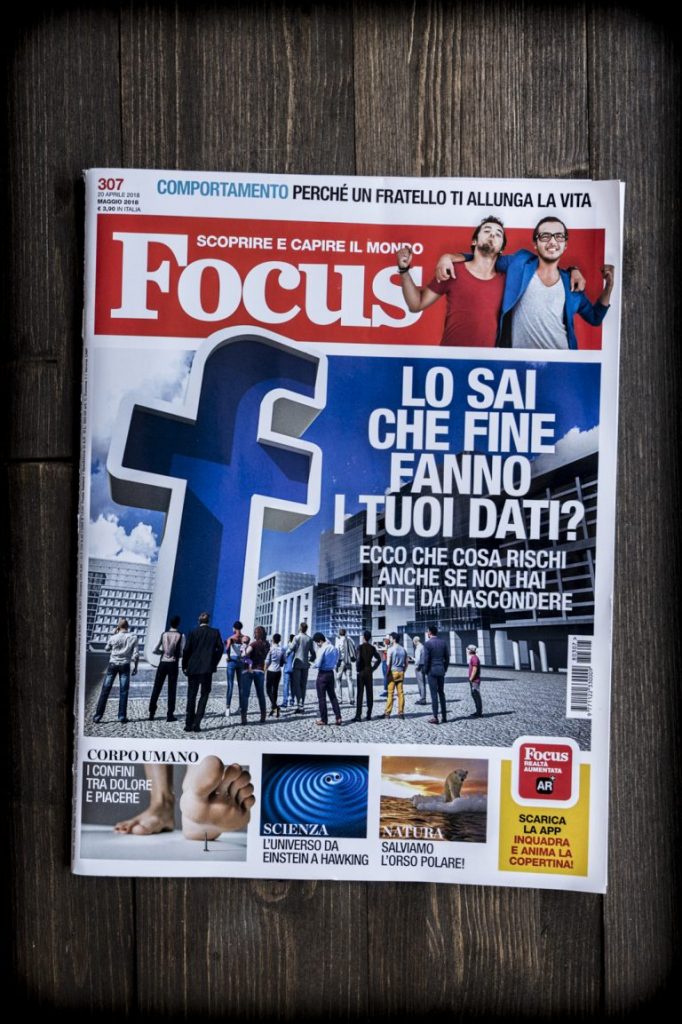 After a few months I started working on almost every issue.

This is one of my latest pieces of work:

It represents two people on a beach suffering of nomophobia (the phobia of remaining without internet access). I took the picture and then edited it with Photoshop.

Focus staff call me and explain the idea they have in their minds. They know that I work with photos, so we usually agree that I can take them by myself, and sometimes they give me stock images after buying them on Shutterstock or Getty Images. 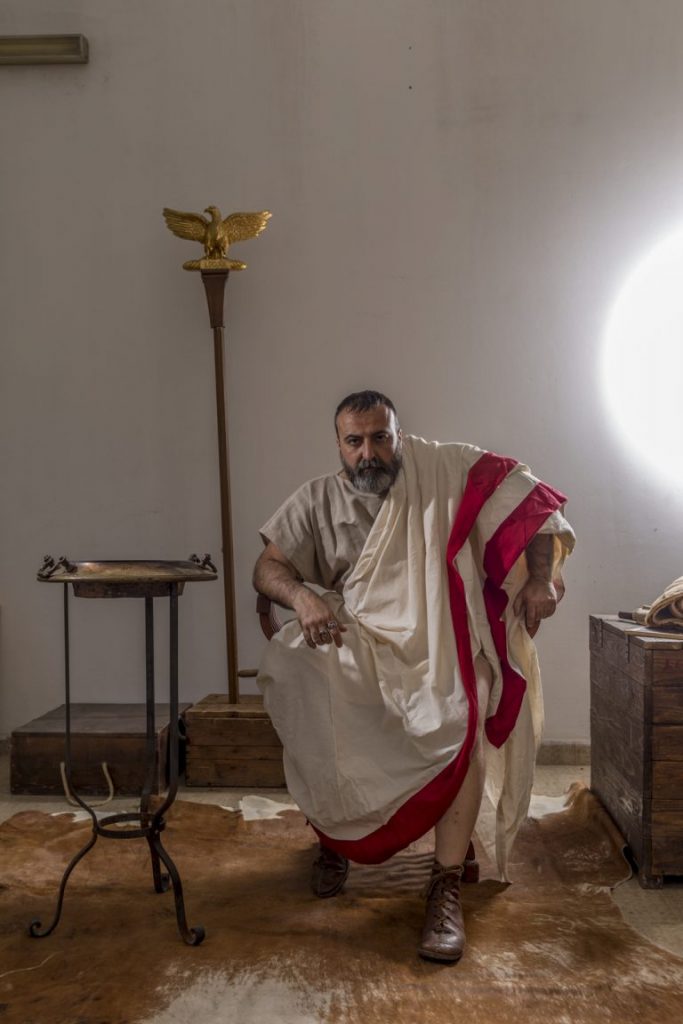 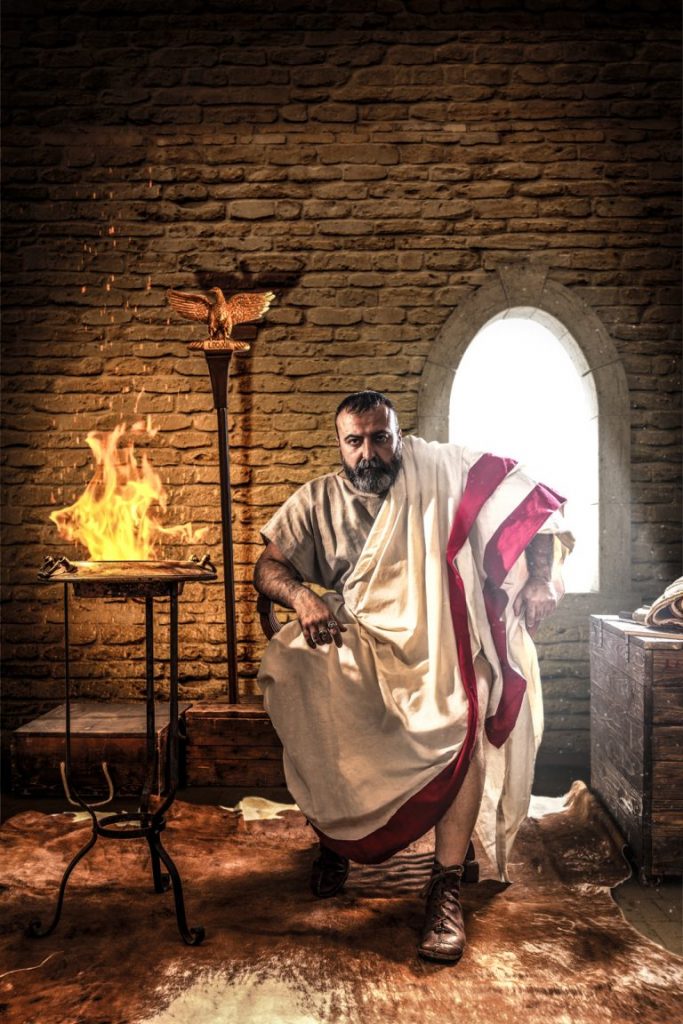 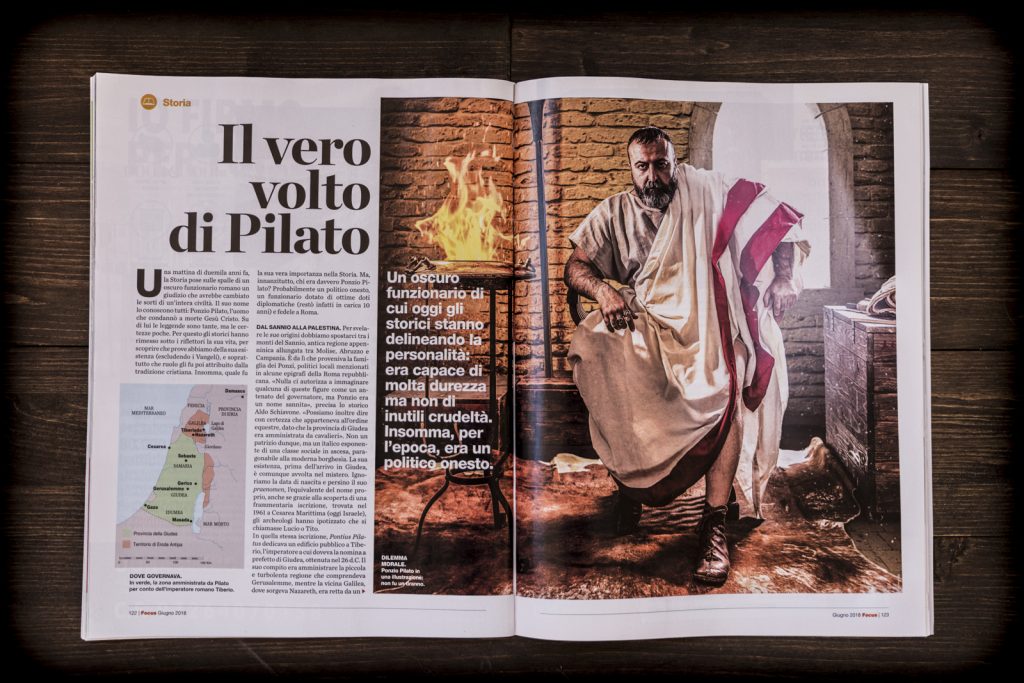 Compared to what I did in Jack, the work for Focus is much more complex and so it gives more satisfaction. Although I have fewer jobs today, I can still say that I earn very well.

Unfortunately, they are on-call jobs, so there's nothing for sure and you always have to be ready.

Once they sent me a message on Sunday morning to do a job with delivery on Tuesday. I obviously did it!

The publishing industry (in Italy) is dead

The publishing industry in Italy is not healthy. Thanks to technology, people no longer read – neither magazines nor books.

Once, I created many book covers, but working on them today is very hard for a freelance graphic designer.

90% of book covers are made with stock images!

But, instead of complaining and crying when I realized this, I started making original photomontages to earn money reselling them on microstock agencies, trying to satisfy the needs of those who wanted to buy a cover.

Believe it or not, for illustrators today, there are many ways to earn thanks to the internet.

I purchased Daniele Carrer's course (learn more), which teaches how to sell photos and videos online, after finding his website while I was looking for information about microstock (the business in which photographers, graphic designers and video makers can earn money by selling their content).

At the beginning, I was not sure whether I should spend my money on it. But when I watched his four free videos I thought it was a good choice, and today I don't regret it.

After watching the first part of the course, I started to put into practice the teachings to create:

From being just a photographer to becoming a stock footage producer

I have been a photographer for many years. I used a Canon Eos 6d and, lately, a mirrorless Eos Canon M50, which cost less than 700 euros.

I use the latter to create:

since the agencies pay almost 100 dollars for every 4K stock footage sale.

My big problem is understanding how to sell my job. Daniele Carrer's course, however, has enlightened me.

The discovery of a software like Adobe After Effects

The advice Daniele gives in his lessons on how to use Adobe After Effects to edit time-lapses led me to learn more about that software. I discovered a tool that can give life to my illustrations and turn them into stock footage to upload on microstocks.

In addition, the course taught me something even bigger: how to become an entrepreneur with my passion!

Daniele Carrer's teachings are an encouragement not to give up and believe in what I do!

I changed my life at 40: from an employee to a solopreneur

Seven months ago, I made the big choice: after 14 years of working as a frustrated TV salesman in a mall, I resigned and started betting on myself. My Canon Eos 6d produced great photos but only recorded videos in Full HD resolution. So, I invested my money and switched to a: 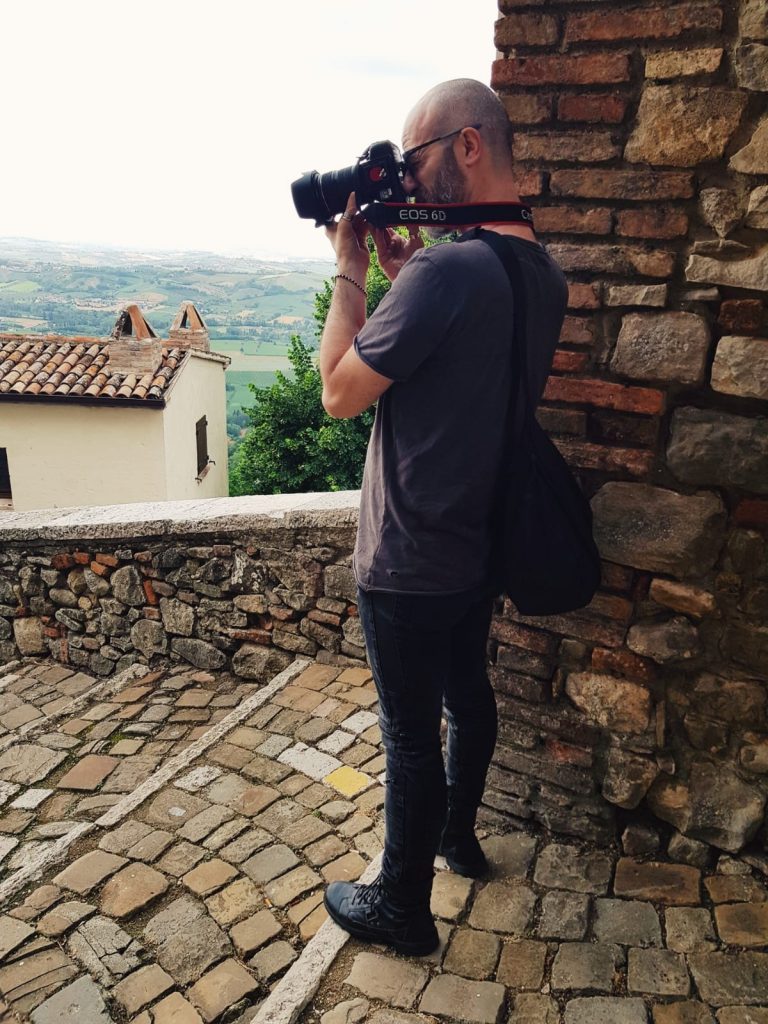 which allows me to record stock footage in 4K at 25fps.

I made the choice to use the lenses I already had. I also bought a gimbal for freehand shooting so I had more creative possibilities while recording my stock footage.

As a photographer, I was skeptical about starting to produce videos. But thanks to the course I decided that, from now on, I will only shoot videos for microstocks, since this is how you can earn more money.

I realized that, to increase my earnings, I would have to concentrate on:

This means recording salable videos and sending a lot of content to:

trying to find a niche with the animations I create with After Effects by adding graphical elements to the videos I record with my Canon Eos M50 – a bit like I've always done with photos.

I purchased the Canon Eos M50 just to record 4K videos. Today, Shutterstock sells 4K stock footage at $199 (169 euros) and 30% of it remains with the producer, while Adobe Stock has almost the same prices. With stock images you earn only a few dollars per sale.

During my last holiday, for example, I returned to my home region in the Italian Alps and went to a medieval historical representation, since I really like those kinds of costumes.

In the city in which I used to live (Rimini), for every event that takes place, there are now more photographers than characters. A few months ago, for example, at a Steampunk event that took place in the republic of San Marino (an enclave in Italy), I was amazed! It was impossible to take a wide-angle photo without including a photographer.

On the contrary, in the medieval re-enactment, there were only 4 photographers, and the others disappeared quickly while I stayed until night.

In general, for some months now, I have been trying to produce content any time I can.

I have nephews and, with lifestyle being one of the most profitable subjects on the stock footage market, I made several videos with them during my last vacation which I will soon turn into stock footage, after their parents have signed the releases.

I shot them, for example:

Daniele Carrer's course has transformed me into a kind of microstock machine, because even at lunch I can no longer be calm and enjoy the situation. 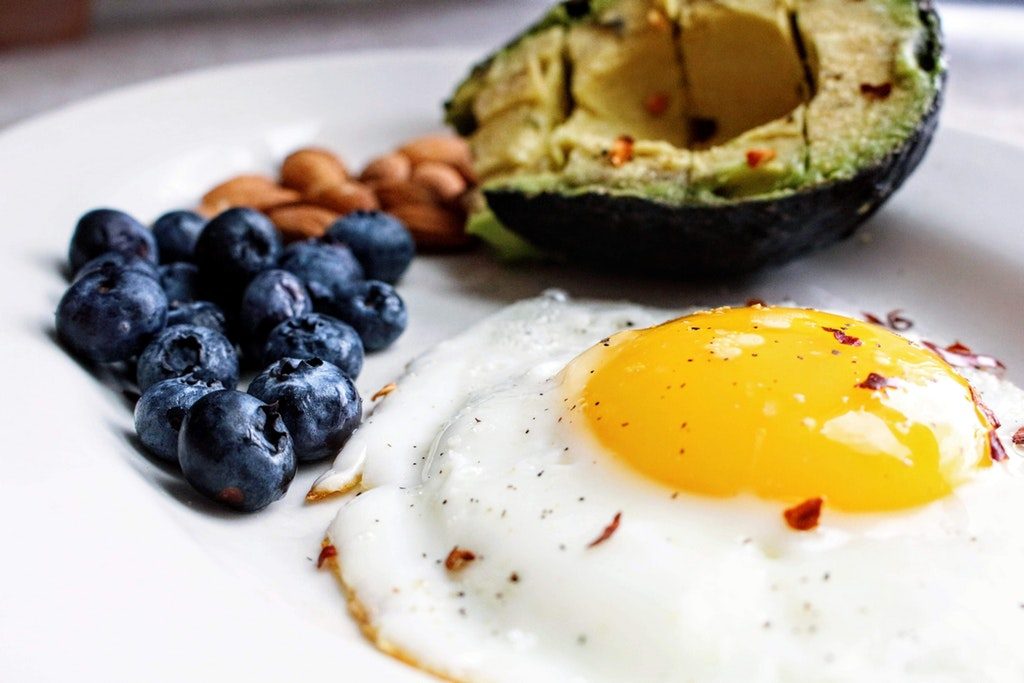 I happened to eat at a mountain restaurant and I said to myself:

Why not making a video of the dish?

In my mind I had the suggestion that Daniele Carrer gave on his course. He explained that, in cities like Dublin which are not in very high demand by buyers, instead of losing days to shoot the city it is better to enter a pub and invent some stolen videos of beer glasses with people in the background.

So, while I waited for the cheese and the glass of red wine, I turned the table into a set and entertained myself that way.

It's hard to make it a full-time job, but at least I'm working hard to do it.

These are my references on the net:

Do you want to sell your photos and videos online?